By ajohnsiney November 28, 2020
Women have been assured that more of them will be elected in position of leadership in Ogun State , Nigeria.
Women have also been assured that the issue of rape  and defilement will be fought to the barest minimum in the state.
The assurances were given when the 100 women lobby group  visited the  former speaker of Ogun state house of assembly, Rt Hon.Titi Oseni , the acting General manager of Ogun State Broadcasting Corporation (OGBC) Mrs Toyin Sogbesan and the caretaker chairman, Obafemi Owode local government, Hon. Mustapha Abdul-Fatai on 25th November,2020. 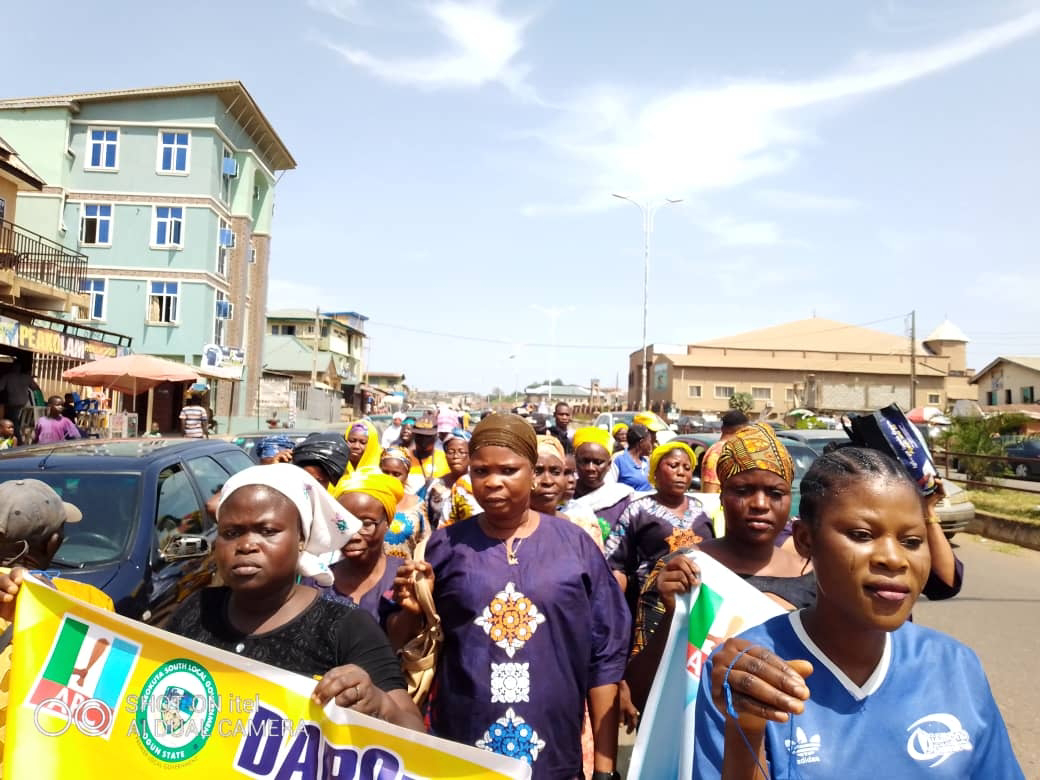 The state coordinator of the group, Prof. Oluwabunmi  Ashimolowo  appreciated  everyone working behind the curtains and also those of us on field working on behalf of 100 women lobby group in ogun state, saying all the advocacies we had today were successful.
She also appreciated Mrs Sogbesan , Hon. Abdul Fatai and Rt. Hon. Titilayo Oseni  for thier contributions towards the growth of women in the society.
Ashimolowo submitted that they were all ready to work with us to ensure that we achieve the objectives of having more women in position of leadership in Ogun State Nigeria.
''I bring you warm greetings and felicitations from the entire Management of the National body of 100 Women Lobby Group led by Madame Felicia Onibon  and the entire management team and women of Ogun State 100 Women Lobby Group led by my humble self.
''We are truly humbled to have been called upon for an advocacy visit after our letter to your Office.
''In this vein, we wish to pay tribute to the tireless efforts of the current Government and all members of cabinet of our ever loving Father and leader, Governor Dapo Abiodun, who has over the assumption of office months back remained consistently committed to the broad vision of the founding members of our dear State.
''The current Government have played a dynamic role that it has played in recent times in helping to modernize the foundations of our market-based economy.
''The efforts of our Government particularly at this time, cannot be overemphasized in the face of the current COVID 19 pandemic which has unleashed what is thought to be the worst global economic downturn since the Great Depression of the 1930s.
''We in 100 women Lobby Group are impressed by your role in supporting the hopes and aspiration of an average Ogun State indigene and residents. Your numerous efforts and selfless services have assisted in improving the way the other gender perceive an average women in the State. You are truly a role model for our children, men and women alike.  It is against this backdrop that we say kudos to you and the entire team.
''100 Women Lobby Group is a network of 100 women-led, not for profit, grassroots based organizations that has been in existence for more than 25 years. The network, which comprises of organisations and individuals is working to improve the participation and role of women in politics and governance and geared towards achieving the 35% Affirmative Action at all levels and beyond.
''Our Vision: 100 Women Lobby Group envisages a Society where equity, Equal opportunity for all, Gender justice, Access to health, Quality Education and Good Governance reign.
Our Mission: 100 Women Lobby Group encourages participatory resolution to solve Socio-Political and Economic Challenges for a better society.
Our Core values: Intelligence, Diligence and Professionalism.
''We also assist to create and increase awareness for women including political aspirants on their constitutional rights and strategies for winning elections; engaging in advocacy, lobbying and participating in decision making to increase significantly the number of women in elective positions over appointive positions, she concluded.