By ajohnsiney November 07, 2020
The National Association Of Nigeria Students, NANS,  South West Zone, has commiserated with the family of Comrade Thomas Oluwatobiloba, popularly known as doubting who died yesterday. 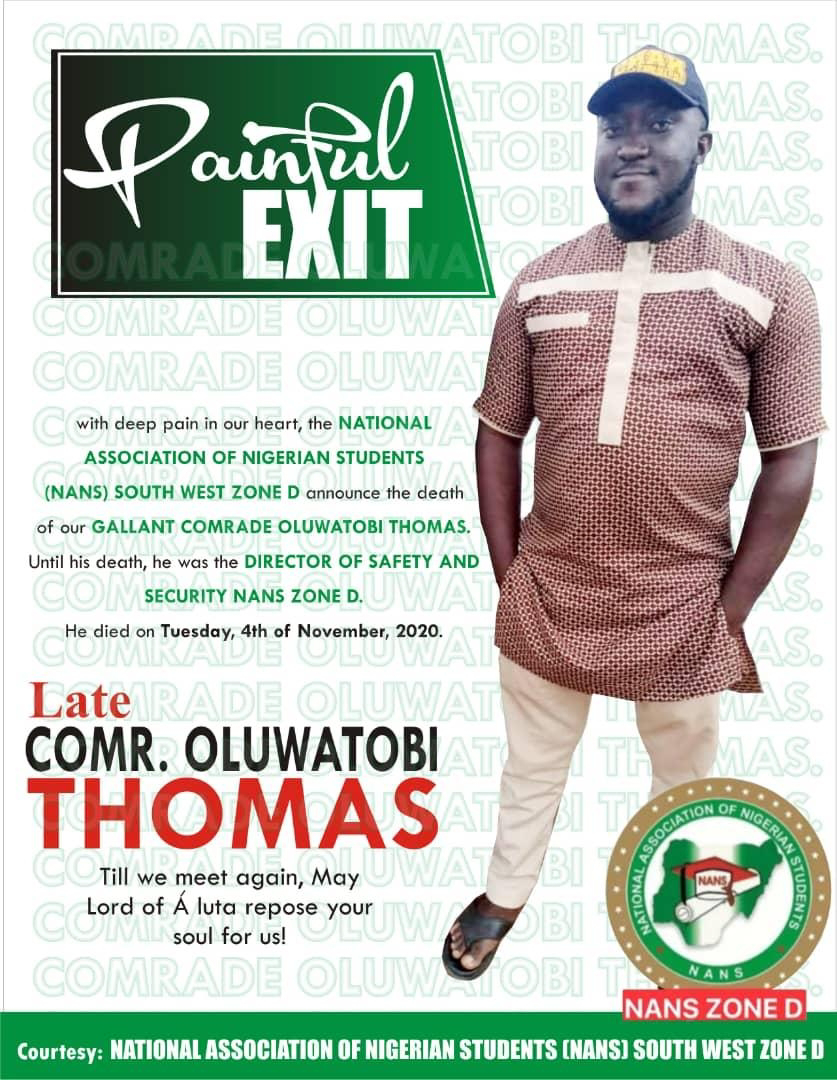 This was stated in a condolence release which was signed by  the deputy coordinator of the body, Comrade Oladimeji Uthman Dan Fodio which was made to news men in Abeokuta.
The release reads ''It is with a heavy heart that the leadership, comrade community and entire students/members of the National Association of Nigerian Students Southwest Zone (NANS Zone D) joined in the mourning of one of us, Comrade Thomas Oluwatobiloba “DOUBTING”.
''Comrade Doubting until his demise was the Director of Security and Safety, NANS Zone D. He was a dogged, rugged and a freedom fighter. He has won bravely in many battles on the field of struggle for students security and welfare across the zone, but unfortunately lost the battle for his life while being operated for appendix. He had his last breath at the State General Hospital, Ijaiye, Abeokuta.
''The news of his passing is particularly saddening because of how much he meant to the Southwest students community. He was a loyal and dauntless warrior, student right activist, result oriented comrade and role model to many young Comrades.
''Meanwhile, we have received information about some unscrupulous elements who under the guise of grieving our brother and seeking justice for his death, planned  to stage a protest. It is very unfortunate that we still have such miscreants, selfish and ill fated individuals amongst us who makes merchandise of other people's sorrow and loss for selfish gain and cheap self publicity.
''We therefore use this as a disclaimer that no student in the Southwest Zone or member of the Zonal executives is carrying out any demonstration or demand in seeking justice for the deceased. We have decided to allow our comrade rest in the bosom of the lord peacefully. We also use the same opportunity to sound a note of warning to any individual or group planning to perpetrate this devilish act to have a change of mind and desist immediately.
''We are charging all law enforcement agencies in Ogun State to look out for such elements and round them up for prosecution. The leadership of the Zone have met the grieving family and they have accepted the fate that their precious son has departed from this world according to his Creator's dictate. Hence, proper punishment should be melted on anyone apprehended for impersonation of NANS or extortion through false grieve.
''We also beckon on all Southwestern states government  to really look into improving the state of our health care standard as a nation. At this age and time, although not hundred percent, but the greater cases of appendix and related surgeries are normally successful.
''We send our hearty condolence to the family, colleagues and friends of the deceased as we pray that they shall be granted fortitude to bear the great and irremediable loss'' it concluded