By Radio moment with Omonaija November 02, 2020 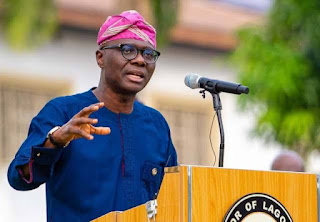 Hon. Adeleke Olabanjo of the All Progressive Congress , APC,  in Lagos State has commended the lagos state governor,  Mr Babajide Sanwo-Olu for flagging off  reconstruction of Eti Osa-Lekki -Epe  road in the state

The 2019 aspirant of the Lagos State House Of Assembly while speaking with newsmen in Lagos made the commendation, saying that he was impressed by the committment of Sanwoolu towards the development of the state.

Recall that on Sunday Sanwo-Olu, rolled out a major infrastructural overhaul in the Epe Division of the State, flagging off the reconstruction of Eti Osa-Lekki-Epe Expressway 40 years after.

The governor flagged off the first phase of the road project up at a ceremony held at the Pan African University in Eleko, Ibeju Lekki area. The first phase, which will be completed in 20 months, will cover 18.75 kilometres, stretching from Eleko to T-Junction in Epe.

The residents, who heaved a sigh of relief, thronged the ceremony where Sanwo-Olu formally kick started the project.

The road was constructed in 1981 as a single carriageway, but underwent an upgrade to a two-lane carriageway in 2006. Its condition, however, became deplorable as a result of population growth and increased vehicular traffic.

Adeleke noted that Sanwo-Olu’s intervention on the road is an  effort at making life better for Lagos citizens and improving the ease of doing business in the State.

He added that the road is  important to the State’s economic prosperity.

The APC member submitted that the administration of Sanwoolu will leave no  part of Lagos  behind in his government’s quest for transformational projects.

He therefore called on the people of Lagos State to continue supporting the administration of governor Sanwo-Olu. He also enjoyed them to see Tinubu  as a leader who people should look up to.