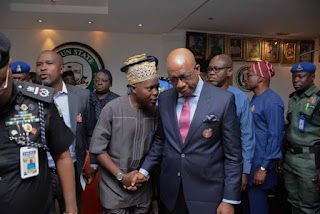 Workers in Ogun  State today  have started rejoicing, upon the alerts of October salary received from their respective banks, with the new minimum wage increase.

You will recall  that the State Government had an agreement with the leadership of the Nigerian Labour Congress (NLC), Trade Union Congress (TUC) and Joint Negotiating Council (JNC) to effect the new mimimum wage and this has been fulfilled.

Farouq who spoke with Journalists today in Abeokuta praised the governor for keeping to his promise, saying that his good deeds will always speak for him.

He urged the civil servants to continue to support Abiodun, noting that he is different from politicians that promise and fail.

The chairmanship however assured the  Abeokuta south staff of more improve conditions of service when he comes on board.

He said that he will continue to collaborate with staff who he described  as engine room of any successful administration.