I Need Assistance Of N700,000 for Orthopedic Surgery, Man Cries Out 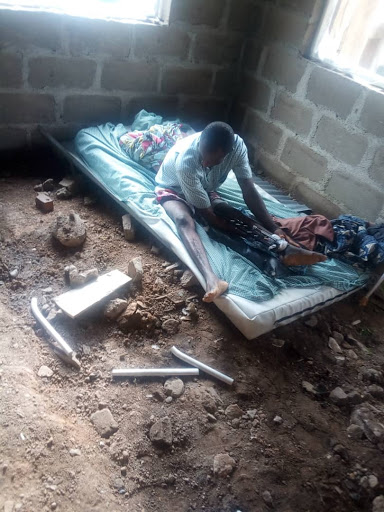 A 36 years old man, Ajibola Fatai has been suffering from multiple fractures injury (both thigh and legs broke) which he needed N700, 000 for Orthopedic Surgery.

Fatai was a driver and planned to take some students to Badagry from Ibadan,  before a car strike at him and was rushed to UCH in Ibadan.

It was learnt that on taking Fatai to UCH, the teaching hospital went on strike due to COVID 19, he was later moved to a private hospital in ibadan.

According to a close relative, Oladipupo kehinde Khadijat,  "He had an accident on the 23rd of March of this year and he was rushed to UCH by road safety, he was diagnosed for multiple fractures injury (both thigh and legs broke) but UCH started strike due to covid19 pandemic and we were asked to moved my brother, from there we moved in to private hospital (Skyline hospital, Abayomi street, iwo road ibadan), they told us he will undergo orthopedic surgery and they bill us N1.2 million with the provision of 6 blood bags, with the help of family and friends we deposited 500,000  with a postpaid cheque of 500,000 dated on the 30th of April because we are expecting money from one relative then, at the end of the month we are unable to meet up with his demand and we told him not to take the cheque to bank, so we deposited 100,000 again, at a point he brought another bill of 260,000 for treatment and discharge and 70,000 for treatment before surgery, so we deposited another 60,000 again" she said

Khadijat disclosed further that the doctors don't attend to him anymore and he has been moved to an uncompleted part of the hospital. 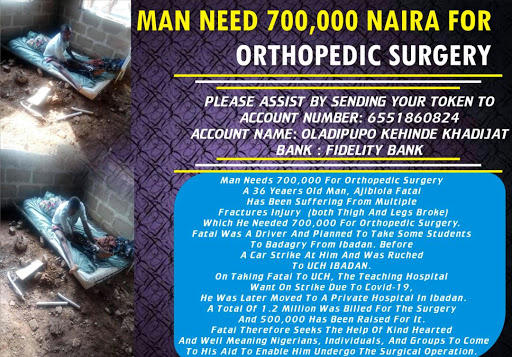 She said, "So because we are unable to pull out more cash the doctor stop giving him drugs and we started buying drugs and dressing materials by ourselves from the beginning of May, he started moving him from wards to wards to the extent that my brother poisoned himself by drinking iodine due to his pressure on him but right now he has moved him to an uncompleted building in the hospital premises.

"But right now we want to move him from that hospital after paying his balance because he said he will not release him until we pay his money and he is not giving him any treatment, so we are planning to move him into a place where they can take proper care of him because right now he is still on bed"

Fatai therefore seeks the help of kind hearted and well meaning Nigerians, individuals, and groups to come to his aid to enable him undergo the surgical operation.