I Am Ready To Serve, Adopt PPP To Enhance Economic Growth Of Abeokuta South LG-Farouq 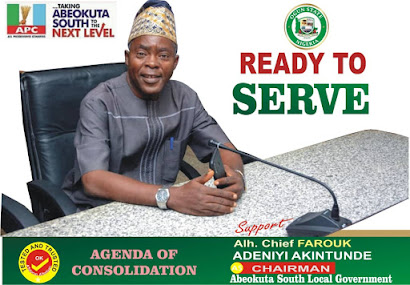 Farouk has described past Chairmen of Abeokuta south local government dead and alive as great son and daughter of Egbaland that have contributed immensely to the socio economic and political development of not only the local government but the entire Egbaland.

He described them as a great compatriots that have serve dutifully and diligently.

The Chairmanship hopeful have assured the people of the local of good governance premise on CONSOLIDATION.

Alhaji Farouk posited that having serve at different capacities and under different chairmen, he is in best position to put all his experiences he had garnered for the benefit of all and sundry.

The Chairmanship hopeful have identified education, primary health scheme, empowerment of youth and women and massive revolution of local government and communities roads as his area of priority.

Farouq noted that  his closeness to Traditional institutions as a township chieftaincy title holder will be an added advantage to get require support and cooperation from our chiefs and Obas in the local government.

He also assured the residents of the local government of adequate security of lives and properties because of his connections to the police and other sister security agencies.

While commending the state government under the leadership of our indefatigable leader and governor Prince Dapo Abiodun MFR on economic breakthrough in the state, the leading chairmanship hopeful maintained he will adopt the PPP as a major step to enhance economic growth in the local government.