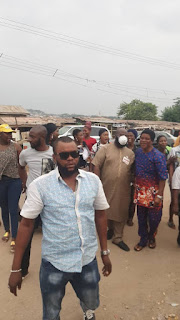 The newly appointed Senior Special Assistant to Ogun state Governor, Hon. Afeez Balogun on Thursday met with the APC faithful at the party Secretariat to show appreciation  over his appointment by governor Dapo Abiodun.

Our correspondent who was on ground gathered that Balogun was warmly received by his loyalists and party members.

The Chairman on receiving Hon. Balogun expressed his heartfelt gratitude to the supporters for always standing by them.

He therefore ushered his guest to his office where they had a closed door meeting with other LG and state party elders.

The meeting which  lasted few minutes ended and they proceeded to a larger gathering where party Executives took turns to address party faithful and the guest.

However, Hon Balogun in his address thanked everyone for their supports.

He also reinstated his open door policy, stating that before the appointment he has made himself available, so definitely after the appointment, he would even be more available to his people.

Balogun said "This appointment isn't mine, it is Ours and like I have told my friends earlier that this is a challenge to see how we would perform and by the grace of God, you all would testify to good representation."

He also promised to donate a new Printer within 24 hours to the party and also renovate the secretariat before the week runs out.

Also Present at the meeting were Hon. Mayegun, Hon Mustapha Kodaolu Olajide (MKO), Hon Shittu Kazeem and a host of others.