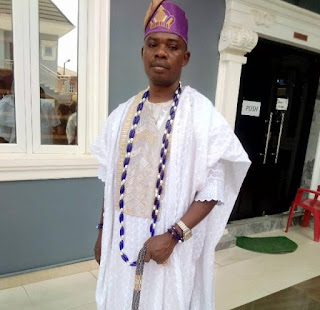 The Onimede of Mede, Ajegunle land, Ipokia local government area of Ogun State , Oba Akinlolu Isaac has begged  the state government to come to their aid in rehabilitating deplorable roads in the community.

He also said that they are also suffering from epileptic power supply in the community.


Oba Akinlolu made the appeal in an interview with Journalists when the ICPC paid visit to Federal government's projects in the town on Thursday for verification.


The Monarch also lamented that electricity distributing company, despite the poor power supply still presents crazy bill for them to pay.

He said that the  government has refused to yield to their request after several written appeals.

Akinlolu stressed that several appeals to the government to change the narrative proved abortive as the appeals were not yielded to.

The Monarch who recalled that during the last election, the people of the town cast their votes for governor Dapo Abiodun appealed to  the governor to  take immediate step as a matter of urgency.

His words "Government should come to our aid in Ajegunle. We don't have light but IBEDC keeps billing us very high. We are suffering from poor power supply."

He added "Despite that we cast our votes for the governor during the last election, we have not seen any significant change in terms of light in this area. We are the ones supplying ourselves power. We need transformer in Ajegunle ward. They should help us.

Other request of the Monarch was rehabilitation of the deplorable Community primary in school the town which he alleged that some supposedly government officials under the guise of reconstructing it left it in a worst condition over five years ago.

Akinolu while also appealing to the state government to provide access road in the town for business to thrive, he lauded Abiodun's efforts for bringing a significant change to the three Senatorial Districts of the state.