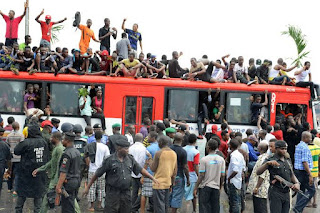 The Students' Representatives Assembly (SRA) of the Moshood Abiola Polytechnic (MAPOLY), Abeokuta, has dissociated itself from an unidentified group of people who embarked on a protest on Monday.

In a statement signed and release from the Speaker, Rt. Honourable Femi Owoeye and Clerk of the House, Honourable Oluwagbemileke Oyeyemi, maintained that  he is not awared of the protest, saying that the leader of the team impersonated him.


The statement reads in parts; "It has been brought to our attention that some unidentified individuals of questionable character impersonated the Honourable members of the Students' Representative Assembly, Moshood Abiola Polytechnic, Abeokuta while embarking  on "Protest against rape" on June 8th, 2020.

"While the protest in itself is commendable, the Students' Representative Assembly vehemently oppose the unlawful usage of the hallowed chamber's name.

"The false usage of the hallowed chamber's name shows that they have an ulterior motive.

"The SRA MAPOLY will like to categorically state that it is not in any way involved in the supposed protest as the House will not associate itself with any activity geared towards taking advantage of unfortunate incidents," it reads.

However, the SRA made it known that it would be participating in a peaceful protest on Tuesday with the National Association of Ogun State Students (NAOSS).

"The SRC will be participating in a legitimate Peaceful Protest against rape today, June 9th, 2020 in collaboration with National Association of Ogun State Students.

"We will like to strongly  discourage individuals, groups or organisations and most especially Nigerian students against impersonation and crime in any form.

"In particular, we will like to notify everyone that works are ongoing to disclose the identity of the perpetrators.

"The repeat of this dastardly act will lead to legal actions against them,

"Moreover, any attempt to use the Assembly's name or MAPOLY at large for selfish interests shall be stiffly resisted", it stressed.

In its advise, the SRA urge MAPOLY students and the general public to deal only with accredited members of the Parliament.

"In addition, The Students' Representative Assembly advise MAPOLY students and the general public to deal with only fully accredited Honourable members of the Parliament.

"Furthermore, The Students' Representative Assembly will not take responsibility for any damages or illicit acts that these group may have committed in the course of the protest.

"Finally, we advise MAPOLY students to disregard any information accredited to the Students' Representative Assembly unless it is from official sources", it said.