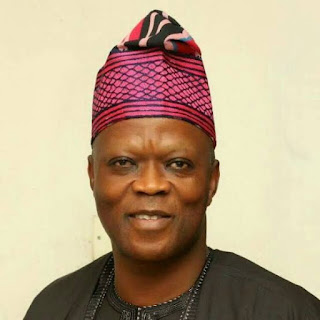 In conformity with Aristotle postulation, Democracy in totality is a non-overrided system of governance that; gives voice to the voiceless, hope to the helpless, empowers the masses and conjures transparency that brings about accountability. All these and more are the good fight the Ogun APC party secretary pulled out when democracy seems uncrystallized and its ideologies trampled by indecent politicians.

Undoubtedly, With a strong mind democratically enmeshed; and as lone ranger, he stood firmly his ground to battle enemies of democracy who have eaten beyond deeper into the sanity of the Party and Abiodun led Adminstration. This laudable action instead of being appraised was welcomed with strong criticism and incessant attacks by lovers of tyranny whose brain has been washed in the pool of "democracy enmity".

If democracy speaks volumes, it will re-echo for people whose prerogative is to sustain its (democracy) ideologies. Only those who glaringly uphold democracy excessiveness by standing against oligarchy, autocracy and plutocracy; and never adulterated its philosophical stances are truly democratic in nature.

Obviously, many spewed fallacies were fired, countless vilifications and tantrums were thrown but the king remained unharmed and bear more fruit. It is far beyond impiety to erroneously conclude that Olubori fights for himself, because thousands of his good deeds, loyalist, mentees and his selfless act speaks for him.

The closer you are, the clearer the picture, the clearer it becomes equates the conviction therein. He who knows him knows a lot, he who despised him misses a lot. Olubori is a true democratic leader of our time.