Abiodun Is An Exceptional Governor That Deserves Second Term - Farouq 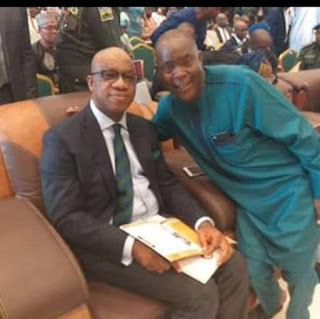 The chairmanship aspirant for Abeokuta South local government, under the platform of All Progressive Congress, APC, Hon. Adeniyi Akintunde Farouq has praised  governor Dapo Abiodun of Ogun State  for  ordering all contractors in the state to complete all abadoned projects

He also described him as an exceptional governor that deserves second term in the state.


You will recall that recently the ogun State governor, prince Dapo Abiodun ordered all the road contractors with immediate effect to complete the kuto bridge and other abadoned roads.


The APC chieftain while speaking with journalist  in an exclusive interview  on Friday noted that the government ably led by Dapo Abiodun is leaving above board and upholding the constitution he swore to uphold.

He said, '' It is a good omen in politics of today that we are having a Governor that is not detribalised and not sentimental. Not minding the parochial and myopic view of his detractors, the governor consider the interest of the people he is serving above and above the discrepancies that might have been evident in the contractual agreement in the award of the roads.

''Our amiable  Governor deserves encomium and praises for this laudable decision. He is an exceptional human being and administrator that deserves a second term at the government house of Ogun state for his unprecedented achievement in the last one year.

''Since he has taken over the assets and liabilities of the former government, he should let the good people of Ogun state know the state of each contract viz a viz money paid so far and the level of work done by the contractors and continue to do the needful to complete all uncompleted projects because they are meant to serve Ogun state people.

He therefore called on the people of the state to continue supporting the governor, most especially with prayers.