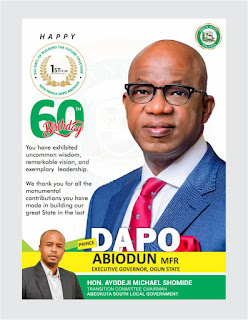 The Chairman, Transition Committee, Abeokuta South Local Government, Hon. Ayodeji Michael Shomide, has congratulated the Governor of Ogun State, Prince Dapo Abiodun, on his 60-Year  birthday and landmark achievements in the past one year, in Ogun State.

Shomide, who extolled the virtues of Governor Abiodun, inherent in humility, diligence, dedication and  pragmatic approach to governance, highlighted the unprecedented success stories of the State Government, under the able leadership of Prince Dapo Abiodun, in the area of Education, Health, Employment, Agriculture, Regular payment of workers salaries and other numerous socio-economic infrastructural development, in the past one year.

He described Governor Abiodun, whose 60th birthday coincided with his first year anniversary in office, as a visionary leader, whose administration partnership, with all the Local Governments, in the State, has yielded tremendous development, in the rural areas.

Hon. Shomide, therefore, prayed to the Almighty God to grant Governor Abiodun long life, good health, knowledge and wisdom, including the necessary resources and means to continue to paddle the affairs of the State.