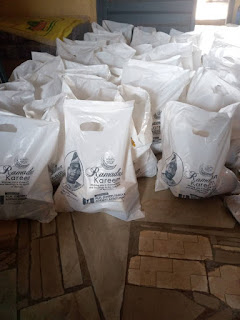 The chairmanship aspirant  for Abeokuta South Local government, Hon. Farouq Adeniyi Akintunde on Friday gave out Ramadan packages to the leaders and party faithful of All Progressive Congress ,APC, in the local government area of  Ogun state.

While presenting the packages to the leaders in Abeokuta Farouq said it became necessary for him to support the party faithful during Ramadan period.

He submitted that the leaders have been doing great in the state, saying that doing the gesture is a way to appreciate them.

The leading chairmanship aspirant urged the leaders to continue to support Abiodun's government, adding that the governor is a blessed man.

He also called on the people of the state to obey the directives of governor Abiodun during this trying period.