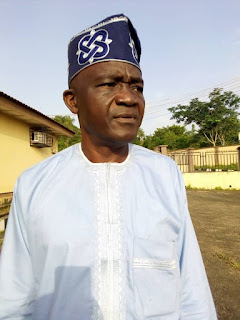 Bamgbose said this this in a release that was made available to newsmen in Abeokuta on Sunday.

The PDP chairman explained that leaders in the party still do not understood (or just don’t care) that all politics remained  local, saying  that handing over the structures of the PDP to Ladi Adebutu (whose only desire for seeking such control was  to guarantee his ambition of being the candidate of the Party for the Ogun State Gubernatorial elections in 2023) was  a recipe for depletion of the commitment of members to the Party in Ogun State and defeat at the polls.

Bamgbose  explained that the new leadership of the party would not allow the party to suffer humiliation and would protect the rights of members to choose their own leaders as specifically prescribed by Sections 223 and 224 of the 1999 Constitution of the Federal Republic of Nigeria and the Constitution of the PDP.

He stated that the NWC  of the PDP had again shown its hands in the enduring struggle in the Ogun State Chapter of the party between internal democracy and autocracy.

“The NWC’s press release of 9th May 2020, which seeks to derecognize the new leadership of the PDP in Ogun State led by me, is not unexpected but it is disturbing that our leaders in this great party still do not understand (or just don’t care) that all politics is local and that handing over the structures of the PDP to Ladi Adebutu (whose only desire for seeking such control is to guarantee his ambition of being the candidate of the Party for the Ogun State Gubernatorial elections in 2023) is a recipe for depletion of the commitment of members to the Party in Ogun State and defeat at the polls.

“This will not be the first time that we will defeat autocracy in our party in Ogun State. Since the contradictions in the Party in Ogun State exploded in the first case (Suit No. FHC/L/CS/347/2012) internal democracy has always won.

“In order to restrain the penchant for political impunity the judgments of the courts in that suit and successive cases (particularly Suit No. FHC/L/CS/636/2016) have sought to create a special case for the conduct of congresses and primaries in the Ogun State Chapter of the PDP.

“This is why the affairs of the PDP in Ogun State have been specially and uniquely governed by that judgment up until our inauguration to succeed the Adebayo Dayo led PDP OGSEC whose tenure expired on the 9th of May 2020 in accordance with the specifications of that judgment,” he said.

The Chairman explained that the  claim of the PDP NWC that only the NEC of the PDP could conduct congresses might be correct for other State Chapters but certainly not for Ogun State Chapter in view of the express stipulations of the judgment in Suit No. FHC/L/CS/636/2016.

“That an order is granted to the Plaintiff (Adebayo Dayo led PDP OGSEC) restraining the 2nd Defendant (PDP) by itself, its agents, servants, proxies and surrogates from henceforth conducting the affairs of the PDP in Ogun State, including meetings, congresses and/or primaries except through the new officers of the party that have emerged from congresses conducted by the Plaintiffs (Adebayo Dayo led PDP OGSEC) as listed in the exhibits attached to the affidavit in support of this originating summons.

“This specific order no. 7 was challenged by Ladi Adebutu in 2019 in Suit No: FCT/FT/CV/29/2018 when he argued before the FTC High Court (just like the NWC press release is doing again) that only the NEC of the PDP can conduct primaries of the PDP – after claiming that he emerged from primaries conducted by the PDP NEC as the Gubernatorial Candidate of the PDP for the Ogun State Governorship elections.

“Ladi Adebutu then sought (on the basis of this argument and his claim) to supplant Senator Buruji Kashamu who emerged from a primary election conducted by the Adebayo Dayo led OGSEC.

“The FCT High Court in its judgment (Per A. S. Adepoju J.) delivered on the 14th of January 2019 (page 46 thereof) stated unequivocally as follows:

“In answer to the poser raised by the Plaintiff’s (Ladi Adebutu’s) counsel as to the proper organ of the Party empowered to conduct primary election …… my answer is the National Executive Committee of the Party but the 1st Defendant (PDP) does not enjoy that right under the present circumstance in the light of the subsisting order of the Federal High Court in Exhibit SPBK1 (The judgment in Suit No. FHC/L/CS/636/2016). The order is an albatross on the 1st Defendant (PDP) and will continue to remain so until set aside by a court of competent jurisdiction”

“Therefore, the organ empowered to conduct congresses for the PDP in Ogun State is the judicially recognized and protected PDP OGSEC.

“Currently, the unassailable position is that congresses have been validly concluded by the outgone, judicially protected PDP OGSEC and new officers (that emerged in accordance with the terms of the orders in Suit No. FHC/L/CS/636/2016 set out above) have been validly inaugurated on the last day of the judicially recognized and specified tenure of the outgone leadership.

“My colleagues and I (following that inauguration) have now legally and validly taken over the running of the affairs of the Party in Ogun State.