IPAC Showers Encomiums On Abiodun At 60 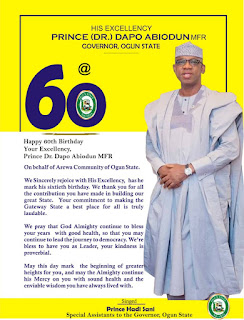 Amidst life intricacy for the dear people of Ogun state, when they salivated for the dividend of democracy and clamoured for a Messianic government that would bring about regeneration in the state, there emerged from the sea of the East, a people-oriented and iconic figure sent by the omnipotent deity to give succor to the people.

Prince Dapo, it is of no doubt that nature smiled on the day you came into the world to join the human race. Your birth was unusual, significant and purposeful to ease the burden on humanity and meet the lamentation of the masses. There whispers among creatures that the "black" Messiah was here.

On this occasion of your 60th birthday, Your Excellency Prince Dapo Abiodun (MFR), IPAC is not only applauding your dexterity and quality leadership skills but also re-congratulating the people of Ogun for having a rare gem like you, sailing the state down the ocean for a destination of change they yearn for and your immeasurable and innumerable achievements within the space of 12 months. One would wonder whether the country's democracy day fixed on May 29 was a result of your birth.

IPAC congratulates you on this landmark birthday and commend the leadership qualities you exhibited as the Executive Governor of Ogun State and so far the number one citizen.

At 60, you recorded several landmark achievements as a man of the people who fears God and the law. These accomplishments have no doubt shown through as you hold forte for the people.

Just like abrakadabra, you have, within a period of one year recorded so mountainous achievements not limited to; * rejuvenation of the health sector

* Radical and rapid rehabilitation of the educational sector- reconstruction of dilapidated primary schools in all the 236 wards in the state could speak little of this.

* Reconstitution of the Board of the paralised Moshood Abiola Polytechnic (MAPOLY) in the state capital and resolving its rocking crisis engineered by the past administration.

* The ongoing construction and reconstruction of roads in all the three Senatorial Districts and the provision of affordable housing for civil servants is also visible.

*Also, amongst Abiodun's giant stride is the fight against the novel covid-19 which has and still claiming lives all over the world.

A man of vision and enviable leadership traits with indomitable determination to take the state to an envisioned heights. No wonder the state now ride on the same lane with Lagos due to its rich and reforbished economy which has made the state centre of attraction of local and foreign investors.

Your Excellency Sir, from all of us at IPAC, we wish you a happy birthday and fruitful years ahead.