Farouq Showers Encomiums On Abiodun As He Turns 60 Year Tomorrow 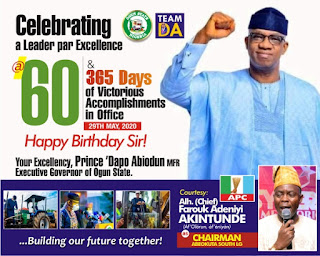 The leading chairmanship aspirant for  Abeokuta South local government, hon. Farouq Akintunde has rejoiced with the Ogun state governor, prince Dapo Abiodun on his sixty- year birthday and his one  year anniversary in office.

Farouq commended the giant strides of Abiodun in all facet of life particularly in education, health, massive infrastructure, housing and uncommon aid to the good people of Ogun  state during the pandemic in the state.

Akintunde Solicited for the cooperation and support of Ogun state citizens for government to deliver more dividend of democracy.

He said ''I want to admonish admonish Abiodun's style of leadership as the right man for the right time in gateway state, He is  goal getter with unparalleled and uncommon qualities that Ogun state people can be proud of'' He concluded