Faidat Showers Encomiums On Abiodun At 60, Describes Him As Goal Getter 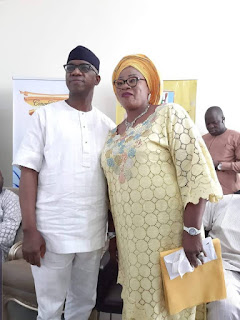 She also congratulated Abiodun on his one year anniversary in office.

Akintunde disclosed this in a statement signed by her which was released to newsmen in Abeokuta, Ogun state.


She described Abiodun as a visionary and exemplary leader, saying that gov. Abiodun can not be forgotten in the state.

Akintunde said, ''I salute your integrity, wisdom, hard-work and visionary leadership which has contributed in no small measure, to the success of our great party, the state and our country at large''

The former SSA  commended the giant strides of Abiodun in all facet of life particularly in education, health, massive infrastructure, housing and uncommon aid to the good people of Ogun  state during the pandemic in the state.

Akintunde who also the iron woman of Ogun state prayed that may the governor continue to prosper in all his endeavors.