*
Consequent upon the designing and fabrication of a mechanical ventilator by the institution, the Ogun state government has commended the initiative of the Polytechnic.

Giving this commendation today was the Secretary to the State Government (SSG), Tokunbo Talabi and the State Commissioner for Health, Dr Tomi Coker during their visit to the institution.

The SSG and the Commissioner were full of praises for the innovation, especially the quality of the components and the packaging of the ventilator.

The visitors tasked the research team with probing questions after which they expressed their satisfaction and appreciation to the Rector and his team for a good job done.

Commenting further, the SSG said he has been particularly impressed and interested in the institution when he first visited the Polytechnic  in the entourage of the state Governor, Prince Dapo Abiodun during the 40th Anniversary and Convocation Ceremony where so many inventions and fabrications by the Polytechnic were exhibited.

He stated that, that was when he knew that the institution is worthy of being designated as a Centre of excellence.
While welcoming the visitors, the Rector Arc. O. O. Aluko explained that he inaugurated the team about a week ago to design and fabricate the ventilator as our own contribution towards the war against COVID-19.

He said that the ventilator was designed and fabricated within seven days.
He however called on the state Government to assist the institution towards mass production of the ventilator so as to make it available when required.

Responding the SSG directed the Rector to intimate the government with the areas of assistance towards perfecting the ventilator. 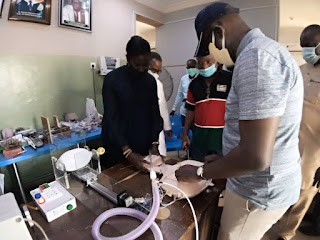 He equally gave some suggestions on how to improve on the equipment.
In the entourage of the SSG and the Health Commissioner were Hon. Babatunde Olaotan, Senior Special Assistant to the Governor, Dr. Layọ, Special Assistant, Heath and others.