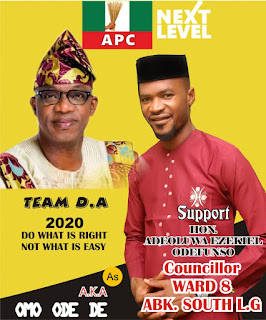 Odefunso gave out indomie, rice, beans. And bread to the people as part of his efforts to surprise cushion the effect of the lockdown in the state.


In an interview the councillorship aspirant, he noted that there is need to support the state government because it cannot do it  alone.

He said ''There is need for Ogun citizens to joining force with the state government to combat the epidemic if we really want a quick recovery. We understand that the state government can not do it alone and we need to support our amiable governor. Prince Dapo Abiodun''

''I want to call on the people of Ogun state to ensure they follow the directive of the state government by ensuring they stay at home and avoid social gathering in order to prevent the spread of the deadly virus'' He concluded.


One of the beneficiaries, identified as Banjoko Ahmed has appreciated the gesture of Hon. Odefunso for his gesture.

He described him as as a generous and philanthropic.

The beneficiaries therefore described him as an helper to them, declaring their support for him.