DAPO ABIODUN: AN EMBLEM OF RESPONSIVENESS 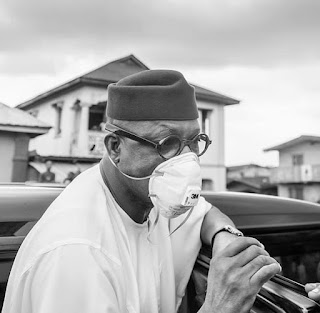 
The underlying tone of Abraham Lincoln perspective of democracy is, "a responsible and responsive system of government". This berates the widely acclaimed assertion "government for the people".

Obviously, nothing would have interest me in the postulated theory of 'democratic  responsiveness' edged out by Linde and Peters (2018), if it hadn't hinge in totality on the present administration. They argued that "responsiveness is essential for responsible government and that political support is an important mechanism in this relationship".

Anyone could be elected, but not everyone would made a good representator. Abruptly, Prince Dapo Abiodun has clearly shown to us his democratic leadership skills and has put into practice an unparalleled uniqueness in the discharge of his constitutional duties among league of governors the nation homes.

I am not speaking out of context, witnessing his rapid  prehentive approach to curtailing the excesses of SARS operative in sagamu local government on the murder of the promising football star gave me a goosebumped likeness to his personality. I have been an ardent follower, propagator and a procreator of his activities and can boldly ascertain his responsiveness to issues which are of great concern to his citizen, few of which are; the resuscitation of the decayed sectors, the rural development and poverty alleviation programmes.

His responsiveness shortchange the sinister arm of the pandemic, even though its outbreak in Nigeria was first discovered in Ewekoro, Ogun state. Not only this, lots of rediscovery and palliative measures has been parted to different sectors list of which; education, health and road reconstruction topped.

Vividly, my brain could reminisce with the good old time when he shut the mouth of thousands of conspirators who never wanted his mandate to witness the day's light. By maintaining a glorified silence, he usurped his political enemies with unexpected achievement.

So to say, the smooth ride of the present administration has not only breathed a great sigh of relief to the good people of Ogun state, but has rejuvenated their sense of belonging and inclusiveness to achieving success through a collective effort. The state's slogan 'Building Our Future Together", echoes this aloud.

Holistically, if a governor could be elected thrice, I would recommend Prince Dapo Abiodun. He isn't ruling, He is leading. As he stands in the forefront with great   wealth of political know-how and technocrats in the fight to revamp the image of our dear State. Obviously, the difference between a shepherd and an hunter has been clearly displayed.

John C. Maxwell was quoted to have said, "A leader is the one who knows the way, goes the way and shows the way". The above assertion being inherent in Prince Dapo Abiodun's humble personality makes him an emblem of responsiveness.