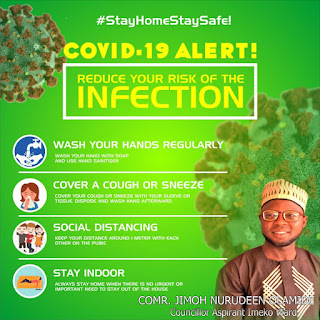 The councillorship aspirant for Imeko ward, Ogun state has commended the administration of President Mohammad Buhari putting in place measures to contain the spread of Coronavirus in the country.


He also lauded the administration of Prince Dapo Abiodun of Ogun state for his efforts so far to fight the virus in the state.

Mide said this in an exclusive interview on Friday  with journalist in Abeokuta, Ogun state.

He described Abiodun as governor who cares about the people of the state' health.

Mide said, '' when the issue of the virus came up, our president, Mohammadu Buhari  put in place necessary mechanism to fight  the virus and I also want to appreciate our governor, prince Dapo Abiodun for his efforts so far. When we recorded the first case, he took a serious action and during the second one he did the same. He is a wonderful man who doesn't joke with his people''

He  also appreciated the ministry of health in Ogun state for supporting in the fight against the virus.