Amotekun: Lagos, Osun, Ekiti Recruit 1,320 Militiamen. "They Can Use Guns" 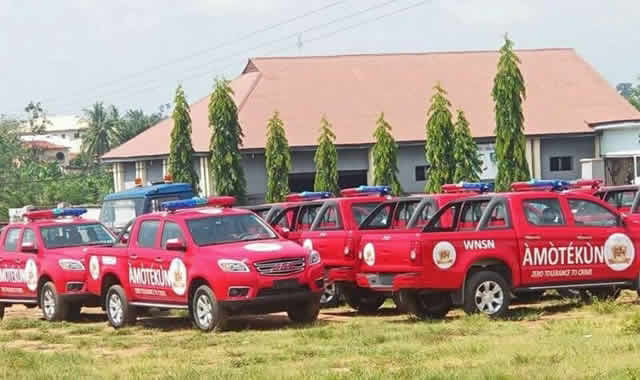 Operation Amotekun: Lagos, Osun, Ekiti to recruit 1,320 militiamen
– as police map out 52 deadly black spots in Yorubaland
– ACF, PANDEF, Ohanaeze, Middle Belt, MASSOB back security outfit
– North will emulate South-West govs –Lalong
– Herdsmen won’t accept injustice from operatives –Miyetti Allah
The new security outfit geared towards tackling kidnapping and criminal activities in the South-West, Operation Amotekun, gained momentum on Friday as Lagos, Osun and Ekiti state governments announced they would recruit about 1,320 militiamen for the purpose.
The announcement came barely two days after South-West governors led by Governor Rotimi Akeredolu of Ondo State inaugurated the outfit, also called Western Nigeria Security Network.
The development came just as the police have identified about 52 deadly blackspots they would focus on in collaboration with the militiamen.
The development came amid the announcement by some social-political groups across the country endorsing the outfit, saying it would help tackle insecurity in the region.
The groups are the Arewa Consultative Forum, Ohanaeze Ndigbo, Ijaw Youth Congress, Pan Nigeria Delta Forum, Middle Belt Forum and Movement for the Actualisation of the Sovereign State of Biafra
Announcing their plans to recruit militiamen from the Oodua Peoples Congress, Agbekoya, Vigilantes and hunters, Lagos, Osun and Ekiti said the recruitment would be handled by each state in collaboration with the security agencies.
The Chief Press Secretary to Osun State Governor, Ismail Omipidan, said the state planned to recruit 700 locals that would work with the conventional security outfits in the state.
Omipidan also said all security agencies were involved in the recruitment, which according to him, was going on smoothly.
He added that the role of the militiamen would be restricted to intelligence gathering.
Herdsmen won’t accept injustice from Amotekun, Miyetti Allah warns
He said, “The success of the Civilian JTF initiative in the fight against insurgency has encouraged us to engage the locals primarily in the area of intelligence gathering.
“We are recruiting 700 locals and all security agencies are involved in the recruitment process. It is ongoing and I believe it will be completed soon.”
A top official of the state close to the Operation Amotekun said the state would inaugurate its own chapter of the outfit before the end of the month.
He said, “ Osun will use the Olajokun Park in Gbongan as their operational base. We are still perfecting the operational procedures and we should complete that next week.
“What we want to do now is to have men on patrol to know the areas very well. The people we will recruit will gather intelligence and send it to the operational base in Gbogan.
“They will not arrest anyone, they will only gather information. We will recruit about 10 people each through the local government areas and the local council development areas.
“These people understand the terrain, they understand the culture, beliefs and other things that can make them function better. It will be successful.”
Also, the Special Adviser on Security to Ekiti State Governor, Brig Gen Ebenezar Ogundana (retd), said on Friday that Operation Amotekun would fully take off as soon.
Ogundana said the states were awaiting the operational procedure which would define the mandate of the operators.
The security adviser said, “It will take off as soon as possible. The only thing we are waiting for is the standing operational procedure that is going to define our mandate so that we don’t send people out and something happened that we will not be able to explain. When we get the document, we will read it to them and we begin operation.”
Ogundana said they would not do any recruitment in Ekiti because “we have people we are going to use”.
He added, “We are using members of the Vigilante Group of Nigeria, it is an institution that is already on the ground. The Oodua Peoples Congress is a regional o