We have not received any returnees from APM says APC 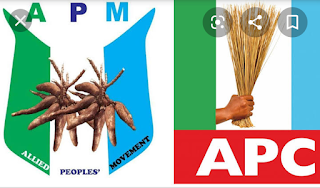 The All Progressive Congress, APC , Ogun State chapter has reacted to the defection of the gubernatorial candidate of Allied People's Movement, APM and his loyalists in the state.

The party  also said that none of the party members are awared of the news of defection, adding that the party is yet to receive  any returnees  from the party.

The  publicity secretary of the party, Tunde Oladunjoye made this known at the party Secretariat, Abeokuta , Ogun State.

He said, ''our party  has not received anything formal about the returnees, we will definitely  respond  whenever we  receive formal contact from them''

Oladunjoye noted tha party is still studying the news of their plan to  return back to the APC ,saying that they would take position soon.


You will recalled that early today the governorship candidate of the Allied Peoples Movement (APM) in the March governorship election in Ogun State, Abiodun Akinlade has announced his return to the All Progressives Congress

Akinlade’s return to the APC comes a few days after the Supreme Court dismissed his case, which he filed against Dapo Abiodun of the All Progressives Congress (APC) as the governor of Ogun State.

Briefing newsmen and party faithful in Abeokuta, the state capital, Akinlade explained that he and his loyalists left the APC in October 2018 because of the alleged injustice done to them by the national leadership of the party.

He however, said it became imperative for them to set their grievances apart and return to their party after they had used all available means to fight the alleged injustice.