I'M HAPPY TO GO UP AGAINST MOURINHO --- LAMPARD 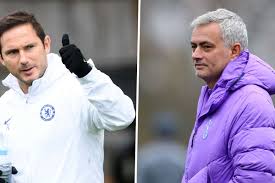 Chelsea head coach Frank Lampard has made it clear that he has more interest in the Derby Clash between Chelsea and Tottenham.
Lampard is ready to test himself against his  onetime coach Mourinho who just signed a new deal with the Spurs fee weeks ago.
Lampard stated that Mourinho will be desperate to beat his side but this would make him work  on the weaknesses of the team because his opponent( Mourinho) is one of the best coach amongst the likes of Kloop , Guardiola in England for now.