Amosun leads over 3,000 loyalists to PDP 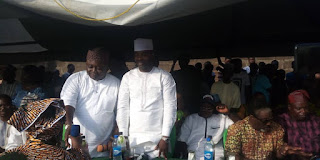 The candidate of Alliance for New Nigeria, ANN, Hon. Akeem Akintoye Amosun led over three thousand members of the party on Wednesday to People's Democratic Party, PDP in Ogun State. Amosun who disclosed this during his declaration and other members of the party at the open field, Isabo, Abeokuta, Ogun State, noted his loyalists and him decamped to PDP because they believed that the party have chances to win ahead of 2023. He said, '' we know that the only two main parties we have in the country and they are APC and PDP and we did analysis and we found that the PDP has good leaders we can work with and it also has the chance at the poll in 2023. ''I and my over three thousand followers are dumping ANN for PDP today, all these people you are seeing they are my followers my people, associates and partners. ''I contested last time during the 2019 election for House of Representatives under Abeokuta South constituency and we still have the intention to do the same in 2023. ''There is no parties that will not have internal crises but we believed that crisis in PDP in Ogun State is minimal and it will be resolved soon. ''I contested last time during the 2019 election for House of Representatives under Abeokuta South constituency and we still have the intention to do the same in 2023'' He there fore appreciated Hon. Ladi Adebutu Keshinton and the PDP state chairman for their presence at the event. Meanwhile, the governorship candidate of the People's Democratic party, Hon. Ladi Adebutu maintained that the All Progressive Congress, APC has chosen the wrong candidate for the state, saying that the party can not meet the standard of PDP. As you can see through out the federation we can only win the 2023 election by landslide and we thank God because of the incompetence of the Ogun State governor, prince Dapo Abiodun that seat will not be difficult and we are going to win by landslide. I urged all parties for the sake of Yoruba land and Ogun State let us stand united. We should remain one strong body, one struggle opposition so that when APC brings their thugs from Lagos we shall resist them. ''If you see what is happening now in Ogun State, the governor can not step forward because if he doesn't not get clearance from Lagos he can not do anything. Ogun State is not a subsidiary of Lagos State we must let them know. ''I want to implore us to be one and so that we can unsit the ruling party in 2023 by God's grace we will take Ogun State to greater height. ''We are on the mission to rescue Ogun state from incompetent Governor and who lack compassion for the state'' He therefore welcome the ANN members to People's Democratic Party, PDP.