By Radio moment with Omonaija September 16, 2019 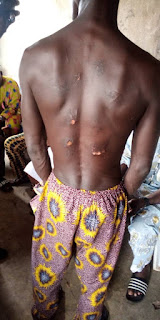 At least, three persons were shot, while one other sustained serious matchette wounds when hoodlums suspected to be land grabber popularly referred to as ''omo onile'' attacked four communities in Odogbolu local government area of Ogun state last weekend.

Numbering about 30, the hoodlums, said to have been working for a notorious land grabbers, Kamorudeen Lamina, also known as ''Sir K. Oluwo'', swooped on residents of Mooro Otefisan, Odoonosa, Gbodomo and Amitekun all in the Ijebu axis of Odoogbolu local government area at the early hours of Saturday where they inflicted injuries on the people.

The hoodlums were said to have infiltrated the four communities in retaliation of their principal, Sir K Oluwo, who is currently being detained at the Sagamu prison over death of three persons on a disputed land in the area.

Victims of the last weekend's gun attack included: Ojujebe Oluwatobi  while Razaq Omotoye was macheted and are all currently recuperating at an undisclosed hospital in the area.

Speaking with journalists yesterday in Sagamu over the attack, leader of one of the communities, High Chief Jimoh Balogun said the attackers were identified as aides working for the detained Sir K. Oluwo.

Balogun, who is the Baale of Odoonosa claimed that the detained Lamina has always dished out order to attack and terrorise the people of the area from the Sagamu prison where he is being detained.

He disclosed that the hoodlums had since last Thursday 12th September, 2019 laid siege on the communities before they struck last Saturday.

The Baale also accused the prison officers officers of always aided the notorious land grabbers, Lamina in dishing out instructions to his aided on who and who should be attacked.

He called on the federal government to investigate on the prison officers and punish them.


Also a retired marine officer, captain  Michael Adegboyega Shonubi  told journalists that the police men in Ogun State have not been helping in the issue of the land grabbing, saying that they have made several efforts in reporting Sir  Kay's case but all to no avail.

He said ''I want to beg  the Inspector General of Police to do something about this issue. We are begging him to come to our aids because our people are in pain. The policemen in Ogun State are not doing justice because of money. We have our boys too that we can mobilize but we are law abiding  citizens. We don't want to take laws into our own hands''

Meanwhile, Adeyemi  Olajide Michael who is  the son of Oloje Ebi of Ojelobale of Sagamu maintained that Sir Kay and his thugs have terrorised the state to the extent that the residents of the communities are afraid to move around.

He also asked the federal government and the state government to ensure justice take place.

''We want to hear good news from the government. Sir Kay and his boys  must face rot of the law. My mother died on the same issue when he attacked us on our land''

When our correspondent contacted the prison authorities refuted the allegations, saying that they will look into the issue.