Hon. Kodaolu congratulates Abiodun on his victory at tribunal

By Radio moment with Omonaija September 14, 2019 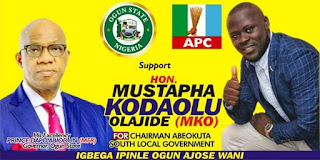 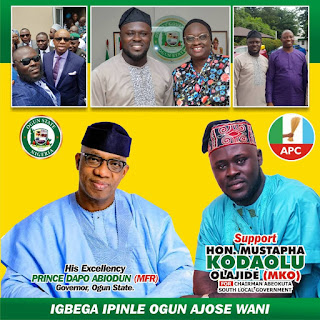 The chairmanship aspirant for Abeokuta South Local Government, hon. Mustapha Olajide Kodaolu, popularly known as MKO,  under the platform of All Progressive Congress, APC, congratulated the Ogun State governor, prince Dapo Abiodun on his Victory at the tribunal

He disclosed this in an interview with news men on Saturday after the reaffirmation of Dapo Abiodun by the tribunal as the aunthentic governor of Ogun State.

''He said, I want to congratulate the people of Ogun State and the members of All Progressive Congress, APC that our amiable governor prince Dapo Abiodun won at tribunal''

According to  him, the victory of Dapo Abiodun is a validation of people's choice and all  the members of All Progressive Congress, APC.