By Radio moment with Omonaija September 04, 2019


A Chairmanship Aspirant for Abeokuta South Local Government, Hon. Engr Olumide Damilare has maintained that the people of Ogun state would be suprised with the massive development that would take place in few months to come.

Olumide insisted that the state governor, Dapo Abiodun is currently working on appointing people with great skills and profile as members of his cabinet so as to help in bringing a rapid development to the state.

The APC aspirant stated this while speaking with newsmen in Abeokuta, the Ogun state capital.

He however advised the people to desist from calling the governor 'baba go slow',  stressing that the governor is coming with full force to develop the state.

Olumide also stressed that the people should not use 100 days to judge how far a government will go.

According to him, 100 days in office is not an embago to know if any governor will perform.

"My amiable governor has never been a slow man, he is taking one step at a time.

"Will he just rush into action, by appointing commissioners and SSAs without scrutinizing them.

"He needs to check what the past governor left behind and know the challenges the ministries are facing.

"If he just jump into  action, his administration will soon collapse".

He further said, "to those who are saying Abiodun might not win the second term, let's wait till then.

"When we get to the bridge we shall cross it.

"The future is still ahead of him and I believe by the time he steps fully into action, you will all be suprise".

Speaking on his ambition, Olumide said he is planning to be the chairman of Abeokuta South so as to help in developing the local government.

He added that his vision is to key into the Abiodun's vision 'let's build our future together'.

He further said, "I am aspiring to be the chairman of Abeokuta south local government to help people and to immortalise my name in the state.

"I am a well known political figure especially in Abeokuta south and I have dream of changing things in my LG.

"Hardly will you be able to point out what the past local government chairmen who have served in the past have done is still existing". 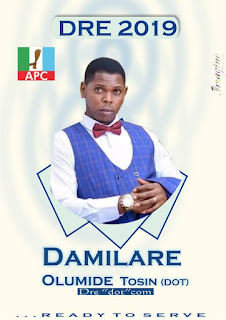