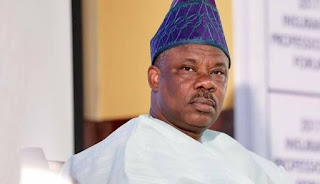 The National Association of Ogun State Students, NAOSS, has condemned the immediate past governor of Ogun State,   senator Ibikunle Amosun over the state of education under his adminstration

The students who disclosed this during a press conference in Abeokuta, Ogun State vowed to support the state government towards sustaining the growth and progress in the education sector.

In an interview with the president of the association, Saka Azeez Abidemi  commended the government for rescuing MAPOLY from the academic crisis it faced for over two years.

''we want to  commend the government for declaring a state of emergency in the education sector and for resustaining  Olabisi Onabanjo Teaching Hospital from losing its accreditation and setting up a visitation panel to resolve the prolonged crisis dealing with Tai Solarin College of Education, Omu Ijebu''

"We applaud the giant stride of His excellency, Prince Dapo Abiodun towards rescuing Ogun state education from the shambles done to it by the immediate past administration of Sen. Ibikunle Amosun.

"Declaring a state of emergency in the education sector is a move that deserves commendation.

"We therefore commend some giant strides already embarked upon by the government amongst which are: The return of MAPOLY to status quo ante after about two years of no direction and ensuring that Olabisi Onabanjo University Teaching Hospital, OOUTH does not lose its age-long accreditation. We also commend the Governor for setting up a visitation panel on TASCE in order a lasting solution to the prolonged crises bedeviling the institution". The statement reads.

The president called on the government to look into its demands which the previous government has failed to meet up with.

According to them, the former governor has failed in the area of payment of bursary to indigenous students, disbursement of scholarship to deserving indigenous students across the federation and supporting the skill acquisition programme of the association.

He then called on all members and stakeholders of the association to support the government towards achieving the agenda of Building Our Future Together.