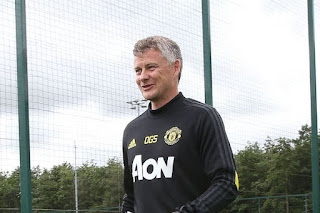 There are no real textbooks for man management, there are few courses you can go on to develop the way you deal with people. You either have a knack with it, or you don't.
So far Ole Gunnar Solskjaer has shown himself to be a commendable man manager. He certainly got the best out of these Manchester United players when he replaced Jose Mourinho last December, taking the soft touch to inspire better performances.
But the honeymoon glow soon wore off. Unitedfinished the season a shambles and as staff and players prepare to fly out to Australia on Sunday for the start of a gruelling pre-season tour, Solskjaer is facing the toughest test of his managerial career.
It was no secret that Paul Pogba wanted out of Old Trafford this summer. He'd already expressed his desire for "a new challenge" in July, but on Friday, less than 48 hours before he was due to join his teammates on the long-haul flight to Perth, the stakes were raised in a transfer saga that could derail United's summer.

Everyone knows the willingness of Paul to move on. We are in the process of that. Everyone knows what the feelings of Paul are."
Raiola wasn't even sure Pogba would be going on tour, with United playing twice in Perth, once in Singapore and once in Shanghai. United remain defiant, they expect the World Cup winner back and they expect him to be taking his seat on the plane.

But this was the calculated escalating of transfer warfare from Raiola. Perhaps he expected his client to already be at Real Madrid now, or back at Juventus? Instead Pogba has spent the final days of his summer holiday in New York, aware that a return to Manchester is getting closer.
Nothing Solskjaer has done in his managerial career to date can prepare him for the battle that may follow in the hours, days and weeks ahead. Every club has its element of player power, but there can be little to compare to this at Molde or Cardiff Cty.
Solskjaer wants to keep Pogba, he wants to build his team around him, but any hope that the 26-year-old would accept a move was unlikely and turn his focus back to United from this weekend has been eradicated by Raiola's tactical comments.
If Pogba doesn't turn up for the flight to Australia today, United and Solskjaer have a problem. Given he was still posting videos on Instagram where his location was tagged at New York in the early hours of Saturday morning, UK time, the Frenchman is going to face some serious flying time at the very least if he is to arrive back in Manchester and then immediately head Down Under.
Failure to turn up should lead to a significant punishment from United, although it's difficult to see how they can't inflame an already tense situation. There would be no easy answer, and perhaps no coming back
It is the coming back into the fold that may be the toughest issue. Pogba has certainly been professional during the last week of his holidays. His Instagram stories have been littered with videos of him training in New York that bring you out in a sweat just watching. He should head off to Australia in excellent condition.
But if he does go on that pre-season tour, Solskjaer will have to manage a player who has left him in no doubt that he desperately wants out of the club. Convincing him to stay now and bringing him back into a young squad will be a difficult challenge, while it's unlikely we've heard the last from Pogba or his agent if they don't get their wish of a move soon.
Whatever happens when United assemble for a flight to Australia today, Solskjaer is about to face one of the toughest moments of his managerial career.