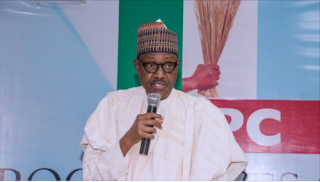 No re-appointment yet for Garba Shehu, Femi Adesina.

dent Muhammadu Buhari has stuck with Abba Kyari in spite of a recent protest by the All Progressives Congress' stakeholders calling for the sack of the president's chief of staff.
Kyari is widely considered as the master puppeteer in Aso Rock while President Buhari is seen as the puppet. But both Buhari and the APC have repeatedly denied the allegation even though the First Lady, Aisha Buhari felt otherwise.
There was a protest in Abuja on June 24 in which the former military dictator was asked to give Kyari the boot.
However, the Presidency said the protest was sponsored.
While on the next day, another group of protesters marched to the Presidential Villa supporting Kyari. The Presidency did not condemn the group as being sponsored.
Yesterday Buhari approved the reappointment of Boss Mustapha as Secretary to the Government of the Federation (SGF) and Kyari as CoS to the President.
The reappointment came 38 days after the president was sworn in for a second term.
President Buhari has yet to appoint his ministers.
He has also not announced the reappointment of the two presidential spokesmen, Femi Adesina and Garba Shehu.
Kyari' s first coming was on August 27, 2015 while Mustapha became the SGF on October 30, 2017 when his predecessor, Babachir David Lawal, was shamefully eased out of office following his alleged grass-cutting scandal.