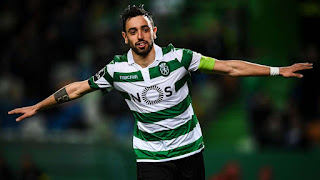 Bruno Fernandes is unlikely to join Manchester United this summer, Sky Sports News understands.
The Sporting Lisbon midfielder has been scouted by United, but he is not one of their priority signings.
United are also yet to decide which players will be leaving Old Trafford in the next few weeks, which would need to happen before any potential deal could be done.
Fernandes has expressed his desire to move to England, and scored in Sporting's 2-2 draw with Liverpool on Thursday morning.
However, it is believed most of the speculation linking the Portugal international has been driven from his homeland, rather than Manchester.
While Fernandes is not at the top of United's wishlist, they do still want to sign a central midfielder this summer, as well as a centre-back and winger.

Sporting manager Marcel Keizer has admitted clubs are keen to sign Fernandes and that he does not know if the 24-year-old will stay at the club.
After seeing his side hold Liverpool to a draw, he said: "I can say about Bruno that he's a very good player and he's important for us.
"Of course everybody would like him to stay but we don't know the situation at the moment. He is here but we don't know what the future will bring, so we will have to wait.
"We know that clubs like him, so we have to see what's going to happen."

Jurgen Klopp is sure to be pleased with the news that Fernandes is unlikely to join United having admitted he was not a fan of the idea.