KATSINA – Unknown armed bandits have kidnapped wife of a Katsina lawmaker and member representing Ingawa Constituency at the State House of Assembly, Alhaji Abubakar Suleiman Tunas and the sum of N100 million was allegedly demanded by her abductors as ransom to secure her release.

The victim identified as Mabaruka, is Alhaji Abubakar Suleiman Tunas’s junior wife and was kidnapped at their Tunas’ residence in Ingawa local government area of the state.

The lawmaker was said to have confirmed the development while narrating the incident on Saturday evening when he received the State Governor, Aminu Bello Masari who was accompanied by the Minister of State for Aviation,, Senator Hadi Sirika on visit to sympathize with the lawmaker.

He narrated the ordeal to the Governor saying the kidnappers in their numbers visited his Tunas residence on Thursday night in his absence and left with his junior wife, Mabaruka.
Tunas said the bandits also carried away valuables such as money, jewelries, and cellphones.

The kidnappers, the lawmaker said had called to demand for ransom.

The Governor, prayed Allah to prevent a reoccurrence of the incident and for the safe return of his wife.

When contacted, the Police Public Relations Officer, DSP Gambo Isah said he will make inquiry on the development. 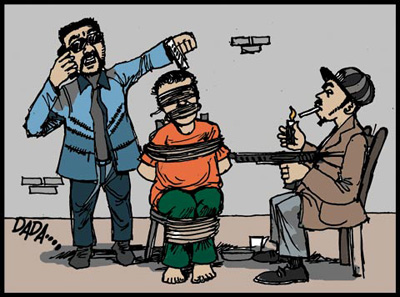